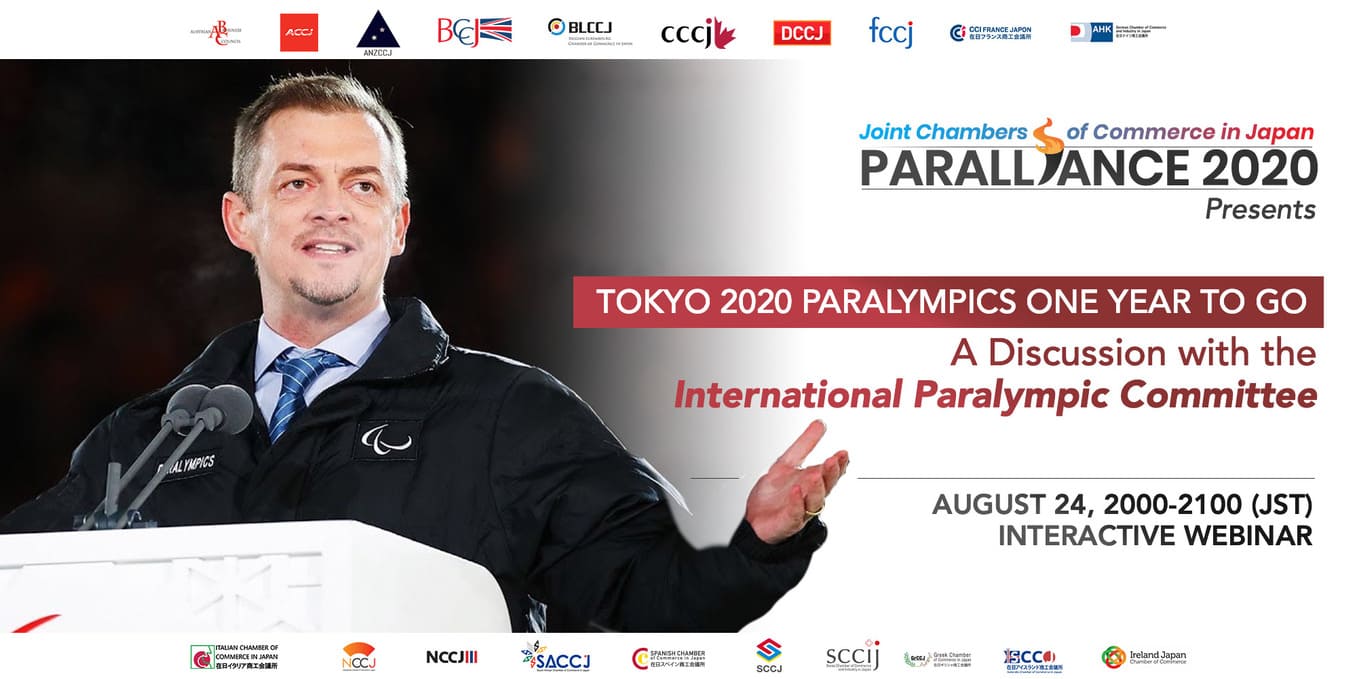 Tokyo (SCCIJ) – Almost 120 guests and members of the Paralliance, an up-coming coalition of 20 chambers of commerce in Japan in support of diversity and inclusion, have celebrated the one-year countdown to the Paralympic Games by participating in a webinar presented by the British Chamber of Commerce in Japan (BCCJ). On the occasion of passing this milestone, Mr. Andrew Parsons, President of the International Paralympic Committee (IPC), and Mr. Yasushi Yamawaki, Tokyo 2020 Vice President and IPC Governing Board member, talked about the preparations and prospects for the Paralympics in the summer of 2021. Mr. Craig Spence, IPC Chief Brand & Communications Officer, and BCCJ Vice President Ms. Alison Beale moderated the webinar.

IPC President Parsons joined the webinar from his home country Brazil and started by stating his regret about not being in Japan now. “Today, we would have been at the Olympic stadium in Tokyo to open the Paralympic Games,” he said. “But we were not able to offer a safe environment to our athletes.” Hence, the postponement was the right decision, although most of the IPC staff was first shocked and then “kind of frustrated”. “They felt they had spent seven years in vain to construct the most complicated jigsaw puzzle for delivering the best games ever,” he recounted the feelings on March 24 when the decision was taken.

After this review, Mr. Parsons voiced his hope that the coronavirus will be under control in one year. “In 365 days, we will be celebrating and it will become a special moment for humanity”, he exclaimed. Until then, a lot of work has to be done again, though. The Japanese IPC board member Mr. Yamawaki joined the conversation from Tokyo and reported that more than 1,000 contracts had to be renegotiated one by one to minimize the cost for each party. “It was like starting from zero again,” he said. IPC President Parsons chipped in and mentioned the IPC’s 300 contracts. “We needed to balance our cash flow because we have to support 182 National Paralympic Committees and the staff of our headquarters in Germany.

One consequence of the new situation: “We will reduce the scale of the game, even if a vaccine is found until then,” the IPC president announced. The safety and well-being of the athletes have to be ensured, but everything else could be scaled down. “We are cutting everything that is not fundamental, there will be no luxuries, and all this will apply also to the future games,” he promised. But the top official of the Paralympic Games also expressed his optimism that there will be no further delay. “We need to work as if the games are going ahead, and I have no doubts that the postponed games will still be special.”

Moderator Craig Spence asked the two speakers about the legacy of the postponed Tokyo Paralympics. Mr. Yamawaki answered from Tokyo that the Games may mark the moment that Covid-19 is overcome. Also, the awareness in Japan for Para sports would have risen dramatically. Almost half of the population could now recognize a single Para sport athlete. Also, 99% of all train stations have been rebuilt for the needs of people with disabilities. “The children in 36,000 primary and secondary schools have learned about an inclusive society during the last four years,” Mr. Yamawaki told the webinar viewers. “They will become the future leaders in creating an inclusive society in Japan.” Usually, parents teach children, but the process has been reversed: Children would now teach their parents about inclusion. “This will be one of the biggest legacies of these games and may have the largest impact on attitudes towards people with disabilities,” the IPC official stated.

Reacting to a question by the moderator, the IPC president talked about the support the Paralympic Games have received from the business community. “In Japan, this environment has been amazing,” he stated. For example, two airlines and two financial groups would be sponsoring the Paralympics at the same time. “What do we want to achieve? We want to change the world,” he added. “Ten days of Para sports will become the catalyst to bring inclusion to Japanese society.” Mr. Parsons pointed to the “Inclusion Summit” as a platform for business leaders to discuss the acceptance of disability into the corporate world.

The webinar viewers heard about the dream of the Paralympics’ founder – that every disabled person in the world could become a taxpayer. “Hence, we need to provide more opportunities and change the mindset of people,” the IPC president said. During the Q&A session, he gave the following advice to the foreign business community in Japan: “Get involved, employ more people with disability, and think how your business can become more inclusive,” he said. “For example, if you own a restaurant, put in a ramp, or do anything to make the life of a person with a disability easier.”

Biographies of the speakers

Andrew Parsons has been President of the International Paralympic Committee (IPC), the Paralympic Movement’s global governing body, since September 2017. Upon election, Andrew made strengthening the IPC’s relationship with the IOC a top priority. In October 2018 Andrew was elected an IOC member. He also represents the IPC in the IOC Coordination Commissions for Tokyo 2020 and LA 2028. Andrew is also a member of the IOC Marketing Commission and sits on the Board of Directors for the Olympic Channel and on the WADA Foundation Board.

Yasushi Yamawaki has been a board member of the International Paralympic Committee since 2013 and a Vice President of the Tokyo 2020 Organising Committee of the Olympic and Paralympic Games since 2014. He is also the Chairman of the Nippon Foundation Paralympic Support Center (2015-present), a councilor at the Japan Anti-Doping Agency (JADA) (2015-present) During his professional career, Mr. Yamawaki worked at Nippon Yusen (NYK Line) and rose to become the executive Vice-Chairman from 2008 to 2011).