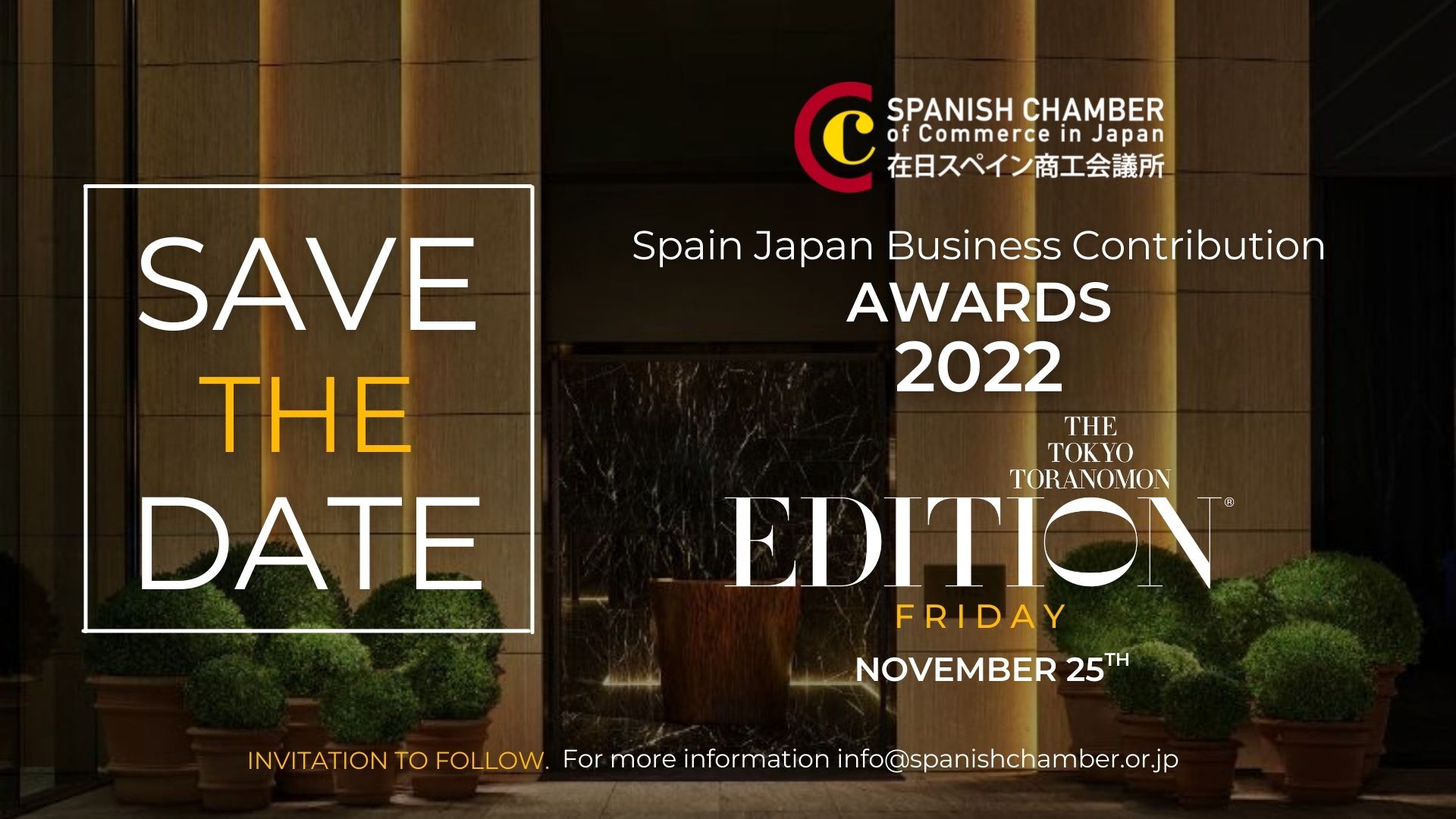 Save the date for the 2022 Spain-Japan Business Contribution Awards (SJBCA).

The highlight of the Spanish Chamber of Commerce in Japan’s calendar will be held on Friday 25 November.

This ceremony has started since 2016. The Board of Directors of the SpCCJ decided to recognise successful relations between Spain and Japan through the awards programme, “Spain Japan Business Contribution Awards”.

In 2016, the Award was given to LaLiga, whose President Javier Tebas flew from Spain for the ceremony, to recognize LaLiga’s impressive work around Sports Business, from broadcasting and digital, to fan merchandise and travel, which influenced the Japanese football business a lot.

In its second year in 2017, the Award was presented to Rakuten’s CEO, Mr Hiroshi Mikitani for their remarkable contribution to Spain Japan commercial relationship by investing in Spain in various sectors. Rakuten is also recognised globally as the Main Global Partner and the first-ever Official Innovation & Entertainment Partner of FC Barcelona since 1 July 2018.

In 2018 we presented the Award to the Spanish multi-national automotive engineering company Gestamp Autotech Japan, to recognise their outstanding performance in Japan, which includes the launch of their R&D Centre in Tokyo and also the opening of production plants in Mie prefecture in Japan.

In 2019, the award’s ceremony took place at the  Residence of H.M. Ambassador of Spain to Japan, Jorge Toledoand the Award was presented to Fast Retailing Co, Ltd, to celebrate their rapid expansion in Spain with store openings of their signature brand UNIQLO, in various locations in Spain.

In 2020, award’s ceremony took place at our corporate member hotel, The Prince Park Tower Tokyo Hotel. In this fifth year, the SpCCJ presented for the first time “the joint award” to Japan Airlines (JAL) and Amadeus IT Group S.A. (Amadeus) for making outstanding contributions to Spain Japan commercial relationship through their partnership agreement signed last year in 2019.

Last year, we presented the award to the Spanish football legend Andres Iniesta and his company SPORTS&LIFE (S&L) at our corporate member hotel, the Tokyo EDITION. We recognized his outstanding career in football both in Spain and Japan and also his contribution to strengthening Spain Japan business relations through his various projects at S&L.

This is an excellent night out and an opportunity to entertain your guests with a top-class evening meal, drinks, and great prizes for raffle winners.